Mutiny on the Bouncy (episode) 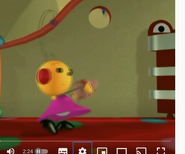 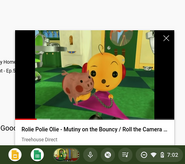 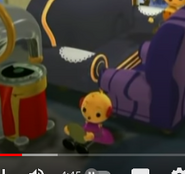 Mutiny on the Bouncy is the thirteenth episode of Rolie Polie Olie.

Olie and Billy are playing pirates.

Olie and Billy are playing pirates in the living room Olie comments that this is gonna be the best Rolie Polie pirate ship ever and they move the couch as the part of the ship Olie drops the cushion on the floor for a plank. Billy saw that the other cushions as sharks. Olie says they have to buried the treasure. Olie and Billy fights about being a better captain. Olie and Billy think harder. Zowie came down with a piggy bank humming. Olie suggest flip a coin.they both say heads I'm the captain. Olie says they can't call heads. Billy suggest flip it so they can call it. Olie says okay.they both says heads but the coin rolls away from them.it bounce off obstacles.then the coin fell into Zowie's piggy bank. Olie and Billy says aw sadly. Zowie says: "Thank You to Olie". Olie and Billy walks sadly. Olie says what captain will be. Olie gets a idea. Olie suggest who can jump the highest will be captain.they bounce higher and higher.they got tired from all the bouncing. Olie says he's good at being the captain. Billy says it's his idea to play pirates. Olie and Billy argue with each other about being the captain.and they left they come back and say arr.

Olie plays pirates with Zowie. Olie tells Spot that he'll guard the treasure.he tells Zowie to guard spot.the music plays as they sail across the seven seas. Olie says to watch out for sea monsters and big rocks. Olie wonders where is his captain. Then Zowie is watching the TV. Then Spot eats the cookies. Olie says we'll never get to pirate island. Mr and Mrs Polie came as their crew members.then they set sail for pirate island.

Percy is steering the wheel. Mrs polie is a pirate too. Olie says that they don't need Billy anymore. Olie says land hoo.their here at pirate island. Mrs polie stops the music and leaves to check on the Brussel sprouts.mr polie leaves to get the phone. Then Zowie steals the cookies. Zowie says arr. Olie tolds Zowie to walk the plank. Zowie says"go swim Spot go swim Spot". Olie is sad so is Billy he sure missed his best friend. Billy sees olie sad and knocks. Olie saw Billy and tells him that he should be captain they argue again. Olie gets a better idea.

Pappy doesn't appear in this episode.

Community content is available under CC-BY-SA unless otherwise noted.
Advertisement