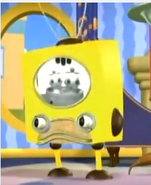 Through Trick and Thin

His first appearance. Olie watches Space Boy and Space Dog on him, and Olie gets the idea to start being Space Boy, with Spot being Space Dog (which never works out due to Spot being unable to learn any tricks). Telly winks at Olie after he is thanked for the idea.

After Chili is cured from his critical sickness (which is revealed to be because Chili was unplugged), him and Lampy (tall) proceed to run in the kitchen and rumba to celebrate this.

Telly gets his major episode in this one (like Chili gets Chili's Cold and Mousey (the cuckoo mouse in Clocky, the cuckoo clock) gets Mousetrap). Olie, Zowie, and Binky want to (yet again) watch Space Boy and Space Dog on him. They decide to play along by wearing helmets (pans and pots). Telly examines this... He looks up, his antennas are bare. He wanted to play to. Unfortunately, he can't get this message to the household family. (If he talked, things would be very different.) Zowie notices they need an extra helmet. Telly is ready... Nope. It goes to Binky. Due to feeling rejected, Telly decides not to work and seems broken. But he is merely confused for being sick. Olie is now sad he can't watch Space Boy on him. Telly is taken in The Garage. Percy begins tweaking him. Then Telly eyes a hubcap. Using his antennas to reach it, he puts it on his head, and he is now satisfied. But Percy doesn't understand Telly wants to play either, and he takes it off of his head and back to where it was found. A few seconds later, while Percy scans him, he sees it on Telly AGAIN (because, again, he reached it and put it on his head). Percy puts it in a completely different location, much to Telly's dismay. Then Olie, Zowie, and Binky come in with a bunch of toys they've found, while Telly looks around and sees an Oil Can. It's small, but it will certainly do. He puts it on his head and begins dancing... as Olie states the toys are so much fun, they may never watch Telly again. This alarms Telly. Now he is sadder than ever. After they leave, Percy notices the oil can on Telly, and puts it away. He's never gonna get watched again and he can't play along when the others watch Space Boy? Now he's fully convinced he isn't wanted in the Polie household anymore, and decides to run away. Spot finds Telly putting himself out in the trash, which instantly makes the Polies realize what they did. Olie takes back what he said about never watching him again. They let him know he IS loved. Telly, now in high spirits, decides to come back home. Then he sees the trashcan. He runs to it, and puts the trashcan lid on his head. Everyone finally gets Telly doesn't just want to be watched, he wants to play. He is welcomed aboard as "Space Telly". Now very happy, he proceeds to tune into Space Boy and Space Dog for the others. The episode irises out on him.

After Percy makes the biggest mistake with the Rejigger-rigger-ator-rator (by "rejogging the thingamajiggerator"), everything begins wiggling and wobbling and floating. Telly is no exception. Spot begins hopping past him and Lampy.

Big Wally's gears are on the fritz due to the tempo synchrolator malfunctioning. For some odd reason, he, by himself, tunes in to Space Boy and Space Dog while Olie and Billy are doing the dishes, but... It's so slow! Before that, the sink and Tick Tock were also very sluggish and tired. Then he falls asleep, along with everything else in Housey (as seen in the living room and garage). This could only mean one thing... The tempo synchrolator's on the fritz! But, after Olie uses the triple tweaker twist (using a wrench) on it... First, Lampy begins acting all sugary, repeatedly turning on and off and on and off again, then Vicky begins scratching his record repeatedly. The next shot... The entire living room is all hyper and restless. Telly is certainly no exception. Space Boy is playing very fast now. Then one of the chairs push him away after Olie adjusts his antenna's frequency. Olie then fixes Big Wally after that... or so it seems. Billy notices an extra gear (or, as Billy calls it, a "whatchamadigger") on the floor. Uh-oh, Big Wally begins malfunctioning at super speed! Telly and one of the chairs hop over the poor coffee table, then everyone else does. However, after Polina fixes Big Wally (Percy, who taught Olie everything about fixing Big Wally in the episode, apparently tweaked when he should have torqued), everything moves at regular speed again.

Everyone has to be quiet to not wake up Coochie and Coo, who finally fell asleep after exhaustive effort from Percy and Polina. He has no volume while Olie, Zowie, and Billy watch Space Boy and Space Dog on him.

Community content is available under CC-BY-SA unless otherwise noted.
Advertisement